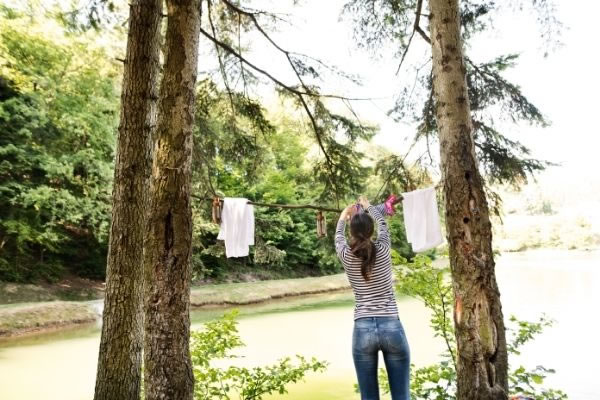 (Disclaimer: Outdoors Happy do have links to products and services which we may earn a commission from)

Caravans have changed considerably over the past 20 years. The thought of a washing machine inside a caravan twenty years ago would have seemed futuristic.

Now full of mod-cons, a caravan can truly be described as a proper mobile home. Everything you could possibly want, or need is all now there.

It’s no wonder so many people have decided to live in a caravan.

One of the last major appliances left to make an appearance though are washing machines, and methods for people to be able to properly wash and dry clothes whilst they are caravanning.

A Caravan can last a very long time. It’s not uncommon to find caravans built over thirty years ago still in use.

Of course, thirty years ago caravans some caravans didn’t even have bathrooms let alone a nice sparkling washing machine.

Clothes were hand washed and hung outside on make-shift washing lines between as sturdy an object as the washing lines could be tied to.

Surprisingly, many people aren’t aware that it’s now possible to install a washing machine into older caravans, or that newer caravans have them built into the kitchen area.

Which Caravans have Washing Machines

Washing machines tend to be fitted in the kitchen area of large 3, 4 or 5 berth static caravans based in holiday homes.

These are built in washing machines as part of the overall kitchen design and installation.

Washing machines are not a small appliance. They take up quite a large amount of space in even an ample sized caravan.

Even if you have a small caravan, or even campervan, it is still possible to take with you a washing machine to clean your dirty clothes as you travel!

What are Caravan Washing Machines?

New caravan washing machines have started to enter the market, and they are proving so incredibly popular that high street retailers are selling out of them fast!

These caravan washing machines can take up to 3.5kg in load and give clothes and other laundry and good wash within just 15mins.

Your standard washing machine tabs can be added to the wash bring all the freshness and cleaning ability you would come to expect from home.

There are different modes to choose from depending on your clothing load.

Once the wash is complete you can then add them to the spin section which will remove as much of the excess water, helping your clothes drive faster!

It won’t of course manage a full load of washing that you are used to at home, but it is big enough for a couple of items each day as and when needed.

How can I install a washing machine in a caravan?

Caravan washing machines are easy to use and require no installation.

They are portable units with an average width of 50cm (half a metre), a width of 30cm and height of 60cm – so you can see how compact these washing machines are.

You need to pour in your own water each time, which is useful in case you have no water hose hook-ups nearby.

Once the wash is done, drain the water in a bucket – and add fresh water for a second spin. This will mimic the action of your own washing machine at home, although it has the benefit of a constant water feed to drain and refresh its water.

Once your clothes are washed and spun, you can simply drain out all the excess water, disconnect from the electricity source and store away.

Is a caravan washing machine worth it?

With an average cost of around £160, and the cost of a single washing machine use at a holiday or caravan park costing an average of £8, it doesn’t take long to see how much could be saved.

After just 20 holiday park washes, the caravan washing machine will have paid for itself.

It may not have the drum size of a full size machine, but it’s portable and you don’t have to queue to use it!

We have been really impressed by the TG23 Portable Washing Machine by Think Gizmos, it’s currently available over at Amazon!

Here’s a video to show you how it works:

Aside from the TG23 by Think Gizmos, here are some other notable caravan washing machines:

In Conclusion – Washing Machines in Caravans

You don’t need a huge static caravan to travel with a washing machine.

Many of the caravan washing machines are suitable for caravans, camper vans, mobile homes, RVs and more!

With their relatively inexpensive cost, versatility and advantages it’s really hard to find a reason not to travel with one on your next caravan adventure.

There are a couple of different ways to heat up your RV on a cold day. RV heaters are the most popular. Although they come in a range of different designs and sizes, they can comfortable warm a...

Continue Reading
link to Are Caravans Hard to Tow? – How to Make Towing Easier

Towing a caravan sounds a daunting task. Towing an average 1,000kg (which is the average weight of a 2-4 berth caravan), having full control of its movements as well as navigating around all sorts...

Outdoors Happy is a participant in the Amazon Services LLC Associates Program, an affiliate advertising program designed to provide a means for sites to earn advertising fees by advertising and linking to Amazon.com. We are compensated for referring traffic and business to Amazon and other companies linked on the Outdoors Happy website.