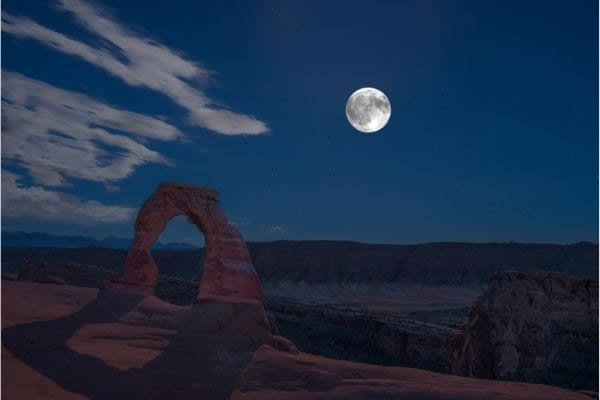 All of us at some point in our lives have looked up at the night sky in wonder, and a sense of just how small we are.

What you are likely to see in the night sky when stargazing will come down to three main factors – how light polluted the sky is, whether there is a full moon (or partially lit moon) and whether it’s cloudy!

For the purpose of this article, we will assume the sky has average light pollution (around Bortle 5) and also that we’ve picked a cloudless night.

It stands to reason the darker the night sky and your surroundings, the brighter the stars and planets will be to your eyes.

The problem with a full moon is that it illuminates the sky like a watchful beacon. Stargazers on these nights usually say the moon has ‘washed out’ the sky.

Is it possible to stargaze during a full moon?

It is possible to stargaze during a full moon. Only the brightest stars and planets will be visible. Usually anything with a magnitude rating of 2 or more will be visible to the naked eye. This will include Mercury, Venus, Mars, Jupiter, Saturn, the Moon, Sirius, Betelgeuse and some constellations.

Stargazing during a full moon isn’t easy, and you won’t see some of the feinter objects, such as the Andromeda Galaxy, but a full moon in a darker sky area can be compared to a moonless night in a large urban city such as New York, Los Angeles or London.

Is it worth stargazing during a full moon?

The question here though is it worth the time and effort to go out and stargaze if the moon is illuminating the night sky.

The best thing to do here is understand the impact it will have. Then you can make the best choice for you.

As your eyes become used to the darkness around your pupils dilate and open to let in a greater amount of light in. Therefore, the darker your surroundings, the darker the sky, the more your pupils open and more light can enter your eye.

This means feinter objects start coming in to view.

Have you ever heard someone say you need to let your eyes adjust to the dark?

It takes approx. 20 minutes for your eyes to adjust to the darkness. This is where your eyes start taking as much light in as they possibly can.

This effect is one of the reasons you will see more stars in a pitch-black sky like a National Park, than you will in an urban city center with lots of light pollution

Not only do your eyes never really open enough to let enough light in to see the feinter objects, but the light from the city washes out the night sky just as the moon does.

There are many stargazers in very light polluted cities and areas who concentrate their efforts on those constellations and planets that are bright enough to see.

For example, a small telescope will see all four of Jupiter’s moons (subject to all four being visible, and none are out of view behind the planet) even during a full moon.

You can still see Sirius twinkling in the night sky.

The Moon itself is an amazing object to cast your gaze at. It looks even better in a standard 10×50 pair of binoculars (or larger if you have them) – and amazing through a telescope.

Although these are just some of the objects you can see, let’s have a look at what delights you can find in the sky, even during a full moon.

What can you see whilst stargazing during a full moon?

There are many night sky objects that can be seen during a full moon. Some objects are visible with the naked eye but with a pair of binoculars or small telescope you will be able to see much more.

Some of those objects we’ve already talked about, but in this section, we’ll look at some of the amazing things you can still see, even if the moon has washed out the sky:

With the Naked Eye

With Binoculars or a Small Telescope

You will be able to see everything covered in the Naked Eye section, but also:

This is by no means an exhaustive list. That would take more pages than we have available for this post, but I have tried to include those objects that can be really fun and exciting to try and spot.

Fortunately, the nearest planets to Earth, which is anything from Mercury to Saturn, are incredibly near – relatively speaking – and are lit up like a beacon by our Sun.

Some of these planets are so bright they are visible before it is fully dark. You can see Jupiter and Venus from just before sunset.

A caveat to mention here is that not every object is in the sky every night.

If you want to find out what is up in the night sky tonight, I recommend the Telescopius website if you are using a PC, Mac or laptop, or if you are using your cell phone you can download the free Star Walk 2 app on either Apple or Android.

Why the full Moon affects Stargazing?

You will probably have noticed that the darker the skies, and the less light around you, the brighter the stars seem to be – and a larger number of stars fill the sky.

If you’ve ever visited a night sky in the darkest areas of the Earth (named Bortle 1 skies) the sky looks as if it’s falling on you!

That was how I described the how I saw a Bortle 1 night sky for the first time.

There were so many stars visible in the sky, and all of them so bright, I had difficulty making out those common constellations we’re so used to seeing, like Pegasus and Orion.

Once they sky is filled with stars in a truly dark sky, the level of brightness between them becomes harder to distinguish, and those patterns harder to make out.

Why though does all this happen?

When we look at something bright our pupils adjust in size to take in the amount of light needed.

The moonlight is much brighter than some of the feinter stars, and therefore as our pupils have opened to let in as much light as the brightest item requires, it means our pupils are not opening wide enough to allow the light from those distant objects in.

With moonlight out of the way, our eyes and pupils can try and adjust to allow enough light to see those feinter stars.

Therefore, a dark sky with no light pollution, and no moon, will allow you to see feinter stars.

This is why you shouldn’t look at your cell phone whilst stargazing. You need to get your pupils adjusted to the dark and allow them to open as wide as possible.

The moment you shine bright screen into your eyes your pupil size will shrink, and you’ll have to wait a further 20 minutes for your eyes to re-adjust to the dark.

In Conclusion – Stargazing During a Full Moon

Given the choice between stargazing during a full moon or new moon is a no brainer. Even a waxing or wanning gibbus moon phase is better, but if you had planned a night of stargazing on a full moon night, there are still some great objects to be seen.

You may have to lower your expectation, and a pair of binoculars or a small telescope will certainly help you, but you’ll still have a treasure trove of night sky wonders to keep you occupied!

There are a couple of different ways to heat up your RV on a cold day. RV heaters are the most popular. Although they come in a range of different designs and sizes, they can comfortable warm a...

Continue Reading
link to Are Caravans Hard to Tow? – How to Make Towing Easier

Towing a caravan sounds a daunting task. Towing an average 1,000kg (which is the average weight of a 2-4 berth caravan), having full control of its movements as well as navigating around all sorts...

Outdoors Happy is a participant in the Amazon Services LLC Associates Program, an affiliate advertising program designed to provide a means for sites to earn advertising fees by advertising and linking to Amazon.com. We are compensated for referring traffic and business to Amazon and other companies linked on the Outdoors Happy website.